Interaction with other policies

Before the adoption of the Marine Strategy Framework Directive (MSFD) in 2008, there were already existing EU legal instruments (including the Water Framework Directive and the Habitats and Birds Directives) that required Member States to assess the status of certain elements of the marine environment (e.g. coastal waters and particular species and habitats). The MSFD requires that such assessments are taken into account, but also covers areas beyond the coastal waters to include all marine waters (e.g. Exclusive Economic Zones), and additional elements that are not addressed in these policies (e.g. underwater noise and litter). The Directive also requires that assessments undertaken by the Regional Sea Conventions are taken into account; these assessments are prepared jointly, by the Member States and non-EU states whose marine waters fall within the same marine region or subregion, and help ensure the assessments for MSFD are coherent and coordinated.

On the other hand, the MSFD represents an important piece of legislation for the implementation in the EU of global initiatives such as the Sustainable Development Goal 14 and the global biodiversity targets. It feeds as well the European Green Deal initiatives, action plans and strategies. 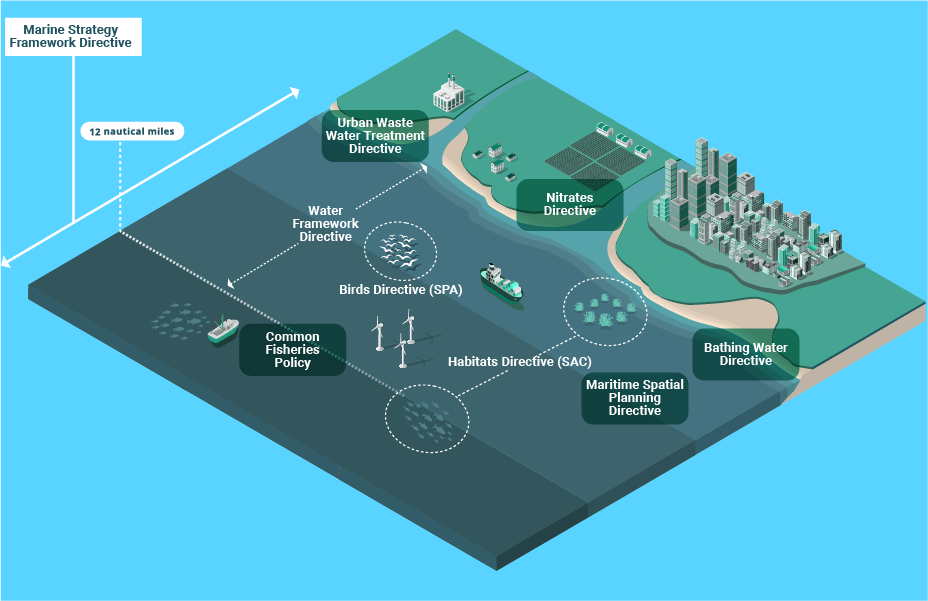 The Water Framework Directive (WFD) was adopted in 2000 and covers territorial waters (out to 12 nautical miles) for aspects of chemical quality, and coastal waters (up to 1 nautical mile [for aspects of ecological quality. Following an adaptive management approach, it establishes a six-year planning cycle, during which Member States prepare River Basin Management Plans that require the implementation of Programmes of measures to help achieve the Good Ecological and Chemical Status of water bodies by 2027 at the latest. The first plans were published in 2009 and the second in 2015. Actions taken aim to reduce marine pollution from land-based sources and to protect ecosystems in coastal and transitional waters, which are vital habitats for many marine species

The Habitats and Birds Directives (adopted in 1992 and 1979 respectively, the second updated in 2009) are Europe’s key legislation on nature conservation. While the Birds Directive protects all wild bird species in the European Union (including seabirds), the Habitats Directive lists a specific set of species and habitats of community importance that require protection and for which Member States should achieve a favourable conservation status. Member States have to identify sites of community importance due to the presence of Annex I habitats and Annex II species, which are later designated as Special Areas of Conservation (SAC). The SACs, together with the Special Protection Areas (SPAs) designated for the conservation of species under Annex I of the Birds Directive, constitute the Natura 2000 network, which is the largest coordinated network of protected areas in the world. This network is reinforced with further spatial protection measures designated by Member States under MSFD Article 13.

The Common Fisheries Policy (CFP) sets out a collaborative approach to managing the EU’s shared seas regarding fisheries. It lays down rules to ensure Europe’s fisheries are sustainable and do not damage the marine environment. The 2013 reform of the CFP aims to ensure that fishing and aquaculture activities are environmentally sustainable in the long term, thereby contributing to the MSFD objectives to achieve 'Good Environmental Status'.

The Maritime Spatial Planning Directive (MSPD), defines maritime spatial planning as a process by which the relevant Member State’s authorities analyse and organise human activities in marine areas to achieve ecological, economic and social objectives. Member States shall consider economic, social and environmental aspects to support sustainable development and growth in the maritime sector, apply an ecosystem-based approach, and ensure that the collective pressure of all activities is kept within levels compatible with the achievement of Good Environmental Status (as defined under the MSFD). The Directive was adopted in 2014, and EU Member States have to approve their Maritime Spatial Plans by 2021.

The Bathing Water Directive (BWD) was adopted in 2006, updating the previous Directive from 1975 by simplifying the management and surveillance methods required. Its main objectives are to safeguard public health and protect the aquatic environment in coastal and inland areas from pollution. It requires Members States to monitor and assess the bathing water for at least two parameters of (faecal) bacteria. In addition, they must inform the public about bathing water quality and beach management, through bathing water profiles. This Directive is the primary data source to assess the inputs of microbial pathogens to the marine environment, required under the MSFD. The measures taken under the BWD are also integrated into the MSFD Programmes of measures (PoMs).

The Urban Waste Water Treatment Directive (UWWTD) was adopted in 1991. It deals with the collection, treatment and discharge of domestic waste water and waste water from certain industrial sectors, with the objective to protect the environment from the adverse effects of urban waste water discharges and discharges from certain industrial sectors. The Directive requires the collection and treatment of waste water in all urban settlements (called “agglomerations”) of population equivalents (p.e.) over 2,000, including tertiary treatment for agglomerations over 10,000 p.e. in designated Sensitive Areas and their catchments. Sensitive Areas can include estuaries and coastal waters which are eutrophic or which may become eutrophic if protective action is not taken.

The Sustainable Development Goals (SDGs) are the heart of the 2030 Agenda for Sustainable Development, adopted by all United Nations Member States in 2015. SDG 14 aims to ‘conserve and sustainably use the oceans, seas and marine resources for sustainable development’. Some of the 10 targets defined under SDG 14 are specifically addressed by the objectives of the MSFD, particularly:

The parties to the Convention on Biological Diversity (CBD) adopted in 2010 the “Strategic Plan for Biodiversity 2011-2020”, which included the Aichi Biodiversity Targets, covering many aspects that fall under the remit of the MSFD, e.g. Target 5 (at least to halve by 2020 the rate of loss of all natural habitats), Target 6 (to manage and harvest sustainably all fish and invertebrate stocks and aquatic plants by 2020), Target 8 (to bring pollution to levels that are not detrimental to ecosystem function and biodiversity by 2020, including from excess nutrients), Target 9 (to identify and prioritize invasive alien species and pathways by 2020), Target 10 (to minimize the multiple anthropogenic pressures on vulnerable ecosystems impacted by climate change or ocean acidification by 2015) or Target 11 (to protect 10% of coastal and marine areas by 2020). A Post-2020 Global Biodiversity Framework will be adopted in 2020 , addressing a 2050 Vision of “Living in harmony with nature".

The European Green Deal is a Communication from the European Commission published in December 2019 that informs on a commitment to tackling climate and environmental-related challenges. It is a new growth strategy that aims to protect, conserve and enhance the EU's natural capital, and protect the health and well-being of citizens from environment-related risks and impacts. It commits to the implementation of an EU 2030 Biodiversity Strategy, a Zero Pollution Action Plan, a Farm to Fork Strategy, a Circular Economy Action Plan, and a Climate Law. The Green Deal is therefore a key policy that fosters the full implementation of the existing environmental legislation and goes beyond that, proposing a green European Union that supports the global ambition of ensuring that all the ecosystems are restored, resilient, and adequately protected by 2050.

The EU 2030 Biodiversity Strategy builds upon the implementation of the 2020 Biodiversity Strategy (which translated the CBD Strategic Plan for Biodiversity into a European framework), as well as on the Post-2020 global discussions and the European Green Deal ambitions. The new Biodiversity Strategy aims to tackle the key drivers of biodiversity loss, including unsustainable use of land and sea, overexploitation of natural resources, pollution, and invasive alien species. It aims to make biodiversity considerations an integral part of EU's overall economic growth strategy. The strategy proposes to establish binding targets to restore damaged ecosystems, to improve the health of EU protected habitats and species and to reduce pollution. The strategy brings forward concrete steps to put Europe's biodiversity on the path to recovery by 2030, including transforming at least 30% of Europe's land and sea areas into effectively managed protected areas. The implementation of the MSFD will play a crucial role to achieve the Strategy’s objectives.

Look at the WISE Marine Dashboards on marine features under other policies to dynamically explore the assessments on the ecological and chemical status under the WFD, the conservation status of marine species and habitats under the Nature Directives and the coverage of MPAs in EU waters.