In Europe, 38 % of surface water bodies are in good chemical status

Other chemicals may also be discharged in significant quantities. Such substances are known as river basin specific pollutants and are part of the assessment of ecological status.

Assessment of chemical status or potential of surface water bodies

Priority substances enter water bodies through a range of pathways and from a variety of sources, including industry, agriculture, transport, mining and waste disposal, as well as from our own homes. Significant levels of some priority substances have built up from historical use, and this legacy pollution may persist long after polluted discharges and inputs have ended. In addition, some priority substances occur naturally, such as metals and PAHs, for which the objective is to achieve near-natural 'background' concentrations.

Priority substances used in industrial processes and products sometimes enter sewers and, via wastewater treatment plants, are discharged into water bodies. The burning of fossil fuels and waste leads to the emission of some hazardous substances (including mercury), which can travel a long way through the atmosphere before being deposited in water.

Pesticides used in agriculture have been widely detected in groundwater and surface water. Mining can exert locally significant pressure on the chemical quality of water resources in parts of Europe, particularly with respect to the discharge of toxic heavy metals. Landfill sites and contaminated land from historical industrial and military activities can be a source of pollution of the aquatic environment. Shipping, harbour and port activities, and aquaculture can also lead to the emission of a variety of chemical pollutants.

The Water Framework Directive seeks to progressively reduce emissions, discharges, and losses of priority substances to surface waters. Those substances classified as priority hazardous substances, should be completely phased out within 20 years, and as a consequence, uses of these substances have been significantly restricted.

The Directive also identifies a smaller group of priority hazardous substances as ubiquitous, persistent, bioaccumulative and toxic (uPBT). The uPBTs are mercury, brominated diphenyl ethers (pBDE), tributyltin and certain polyaromatic hydrocarbons (PAHs). As suggested by their name, uPBT substances persist in the environment, can be transported long distances and pose long-term risks to human health and ecosystems. Due to their persistence, environmental contamination with these substances is widespread, and achieving concentrations at or below the environmental quality standards for this group of substances can be particularly challenging.

A smaller group of priority hazardous substances were identified in the Priority Substances Directive as uPBT (ubiquitous, persistent, bioaccumulative and toxic): mercury, pBDEs, tributyltin and certain PAHs. uPBT substances persist in the environment, can be transported long distances and pose long-term risks to human health and ecosystems. Owing to widespread environmental contamination, achieving concentrations at or below the EQS for this group of substances can be particularly challenging.

There are considerable differences in chemical status between Member States which are linked to choices of assessment methodology, in particular to which extent countries have included the uPBTs in their assessments (FIGURE 2). Red areas are those with more than 50% of water bodies not in good chemical status, whereas the ones with more than 50% achieving good status are blue. Some Member States report that over 90 % of their surface water bodies are in good chemical status, while others report this for fewer than 10 %. The substances most commonly causing failure to achieve good status are the uPBT substances mercury and brominated diphenyl ethers (pBDE). 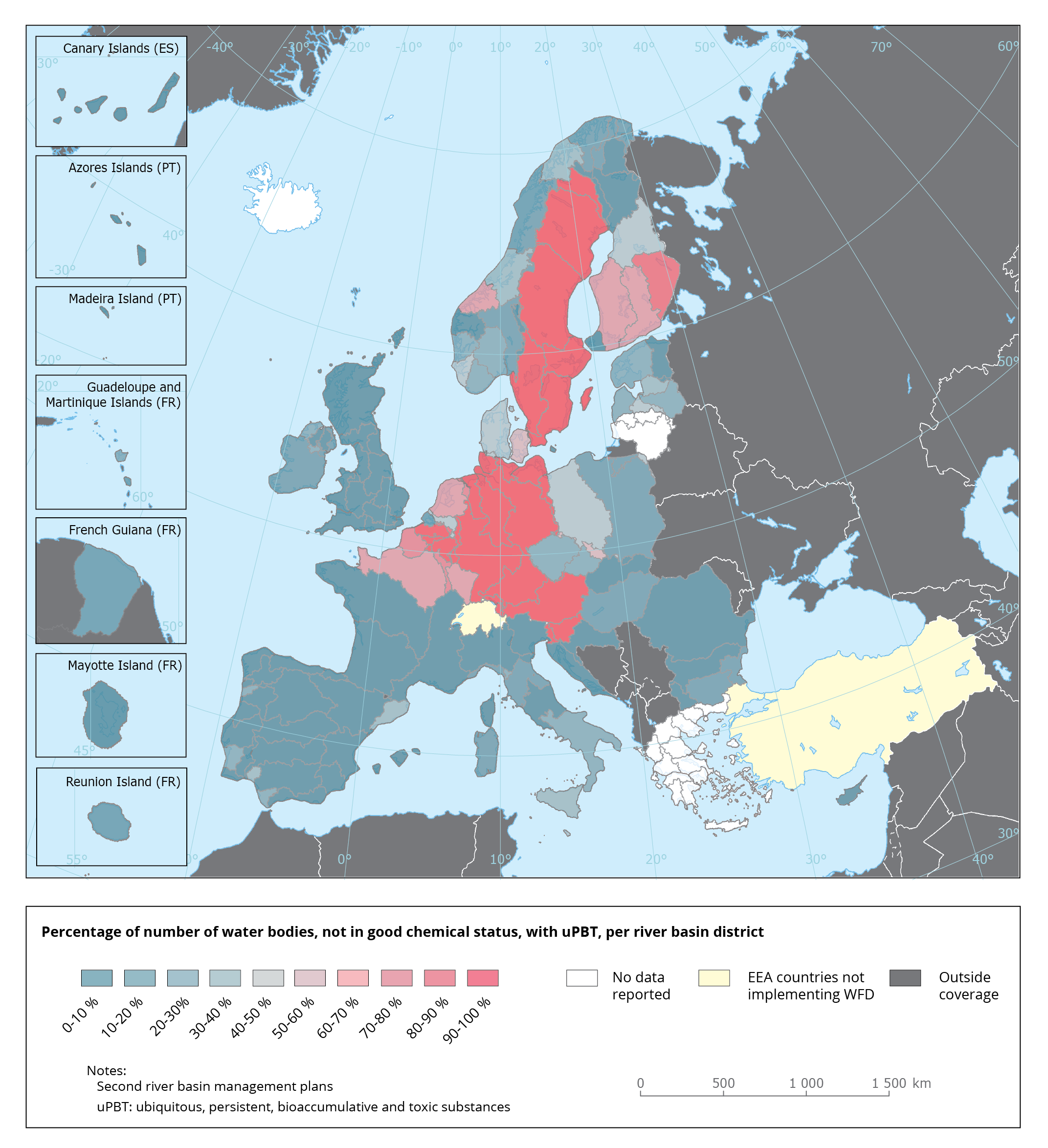 The data, dashboards and maps available from the WISE Freshwater resource catalogue: