Europe’s future depends on a healthy planet. Current climate and environmental-related challenges require an urgent and ambitious response. The EU has committed to achieving climate neutrality by 2050. Reaching this objective will require a transformation of Europe’s society and economy, that will need to be cost-effective, just, and socially balanced. 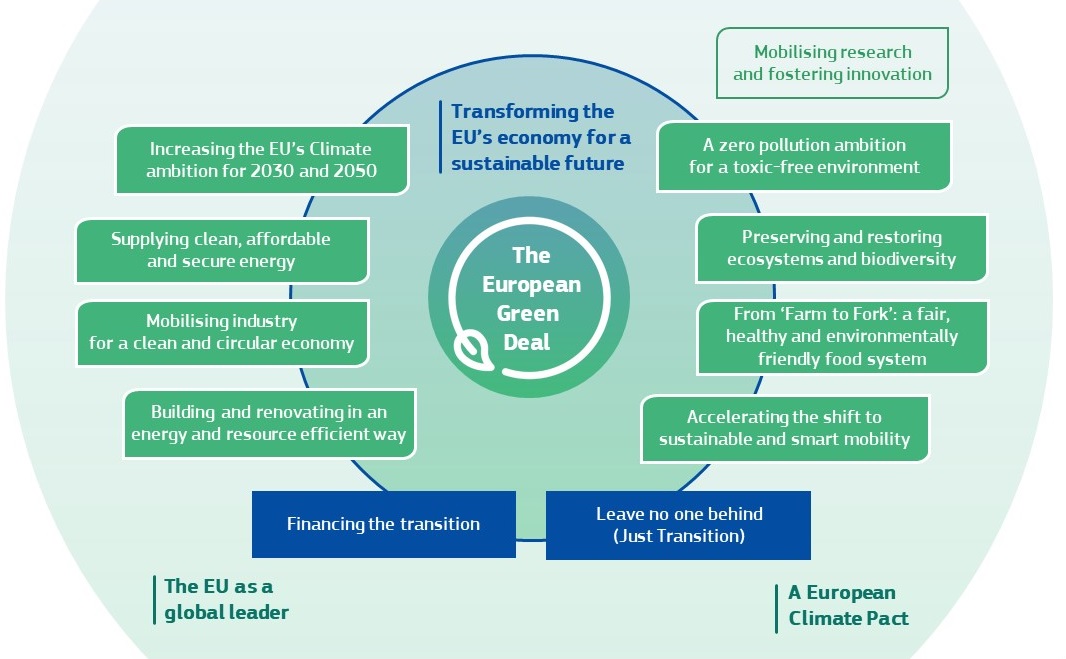 The European Green Deal is a Communication from the European Commission published in December 2019 that informs on a commitment to tackling climate and environmental-related challenges. It is a new growth strategy that aims to protect, conserve and enhance the EU's natural capital, and protect the health and well-being of citizens from environment-related risks and impacts. It commits to the implementation of an EU 2030 Biodiversity Strategy, a Zero Pollution Action Plan, a Farm to Fork Strategy, a Circular Economy Action Plan, a Chemicals Strategy for Sustainability, and a Climate Adaptation Strategy (incl. Climate Law). The Green Deal is therefore a key policy that fosters the full implementation of the existing environmental legislation and goes beyond that, proposing a green European Union that supports the global ambition of ensuring that all the ecosystems are restored, resilient, and adequately protected by 2050.

The European Climate Law writes into law the goal set out in the European Green Deal for Europe’s economy and society to become climate-neutral by 2050. The law also sets the intermediate target of reducing net greenhouse gas emissions by at least 55% by 2030, compared to 1990 levels.

The law aims to ensure that all EU policies contribute to this goal and that all sectors of the economy and society play their part.

European Biodiversity Strategy for 2030 in relation to water policy

The EU 2030 Biodiversity Strategy builds upon the implementation of the 2020 Biodiversity Strategy, as well as on the Post-2020 global discussions and the European Green Deal ambitions. The new Biodiversity Strategy aims to tackle the key drivers of biodiversity loss, including unsustainable use of land and sea, overexploitation of natural resources, pollution, and invasive alien species. It aims to make biodiversity considerations an integral part of EU's overall economic growth strategy. The strategy proposes to establish binding targets to restore damaged ecosystems, to improve the health of EU protected habitats and species and to reduce pollution. The strategy brings forward concrete steps to put Europe's biodiversity on the path to recovery by 2030, including transforming at least 30% of Europe's land and sea areas into effectively managed protected areas. The implementation of the WFD and other water policies will play a crucial role to achieve the Strategy’s objectives.

Read more about the European Biodiversity Strategy for 2030

Farm to Fork Strategy in relation to water policy

The ‘farm to fork’ strategy aims to help the EU achieve climate neutrality by 2050 by shifting the current EU food system towards a sustainable model. In addition to food security and safety, the strategy’s main goals are to ensure sufficient, affordable and nutritious food within planetary limits, promote more sustainable food consumption and healthy diets, ensure sustainable food production through a substantial reduction in the use of pesticide, antimicrobials and fertilizers and an increase in organic farming, reduce food loss and waste, combat food fraud in supply chain and improve animal welfare. In October 2020, the Council adopted a set of conclusions on the strategy, endorsing the goal of developing a European sustainable food system, from production to consumption. The conclusions entail a three-fold political message from the member states, who agreed to ensure access to sufficient and affordable food while contributing to EU climate neutrality by 2050, a fair income and strong support for primary producers, competitiveness of EU agriculture at global level.

A Zero Pollution Action plan for Air, Water, and Soil

The zero pollution vision for 2050 is for air, water and soil pollution to be reduced to levels no longer considered harmful to health and natural ecosystems that respect the boundaries with which our planet can cope, thereby creating a toxic-free environment. This is translated into key 2030 targets to speed up reducing pollution at source. These targets include: improving air quality to reduce the number of premature deaths caused by air pollution by 55%; improving water quality by reducing waste, plastic litter at sea (by 50%) and microplastics released into the environment (by 30%); improving soil quality by reducing nutrient losses and chemical pesticides’ use by 50%; reducing by 25% the EU ecosystems where air pollution threatens biodiversity; reducing the share of people chronically disturbed by transport noise by 30%, and significantly reducing waste generation and by 50% residual municipal waste. The action plan aims to strengthen the EU green, digital and economic leadership, whilst creating a healthier, socially fairer Europe and planet. It provides a compass to mainstream pollution prevention in all relevant EU policies, to step up implementation of the relevant EU legislation and to identify possible gaps.

The global chemicals production is expected to double by 2030. Consequently, the already widespread use of chemicals will also increase, including in consumer products. Since most chemicals also have hazardous properties which can harm the environment and human health, European Commission published a chemicals strategy for sustainability Communication (COM(2020) 667 final) on 14 October 2020. This strategy aims to better protect citizens and the environment, while at the same time boosting innovation for safe and sustainable chemicals. The chemicals strategy is part of the EU’s zero pollution ambition, which is a key commitment of the European Green Deal.

Read more about the Chemicals strategy for sustainability

The EU relies on Europe’s industry to lead the transitions towards climate neutrality and digital leadership. The aim is for EU industry to become an accelerator and enabler of change, innovation and growth. In March 2019, the European Council called on the European Commission to present a long-term vision on industrial policy. The Council followed up with conclusions in May 2019, presenting a vision for European industry in 2030. The Commission published its new industrial strategy in March 2020. In November 2020, the Council adopted conclusions on the new strategy, setting out how the recovery from the COVID-19 crisis could be used as leverage for a more dynamic, resilient and competitive European industry. It reiterated that the recovery should be just, should be built around the principles of competitiveness, single market integration, sustainability, cohesion, inclusiveness, solidarity, circularity and environmental protection, and should observe social standards.