Marine litter is defined as any persistent, manufactured or processed solid material discarded, disposed of, or abandoned in the environment. It is now widely recognised that the amount of litter in the environment is significant and increasing. For this reason, marine litter is the focus of growing political attention around the world.
(UN, 2017) 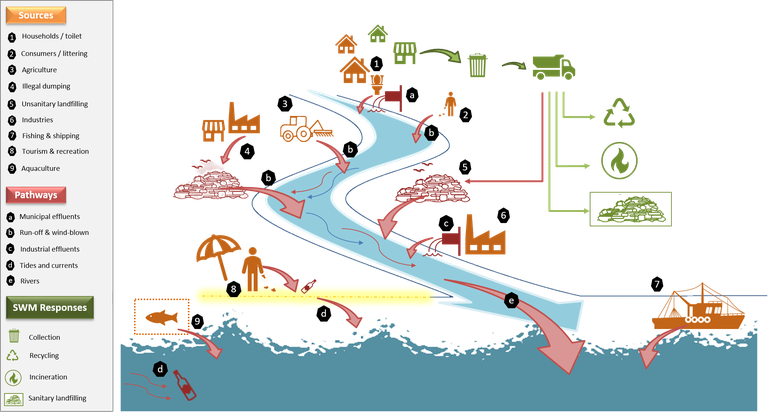 Marine litter pollution is closely related to production and consumption patterns. Citizens’ consumption of goods and services, personal habits (e.g. use of plastic bags and packaging) and waste practices (e.g. littering, poor household waste separation) are drivers for marine litter pollution. The waste management sector, waste water infrastructure, and recycling activities can play a pivotal role contribution to keeping plastic and other materials out of the waste stream. Ineffective activities in these areas can also lead to major points of release of plastic and other items that become marine litter (UN, 2017).

Marine litter is found on coasts, on the water surface, in the water column, on the seabed, even in the deep seas where it causes harm to entire marine ecosystem. Litter items can be transported across the seas and oceans over long distances before being deposited or accumulated in offshore ‘garbage patch’ areas. Litter consists of many large items such as lost plastic bags, cigarette butts and other items that through time degrade and become small, micro and nano particles of plastic. Plastic items are the most abundant, persistent and damaging component of marine litter that accumulates in the environment due to plastic longevity (Figure 2; ETC ICM, 2019).

In relation to 'Marine litter’, the Marine Strategy Framework Directive considers that 'good environmental status' is achieved when ‘Properties and quantities of marine litter do not cause harm to the coastal and marine environment (EC, 2008, 2017)'. 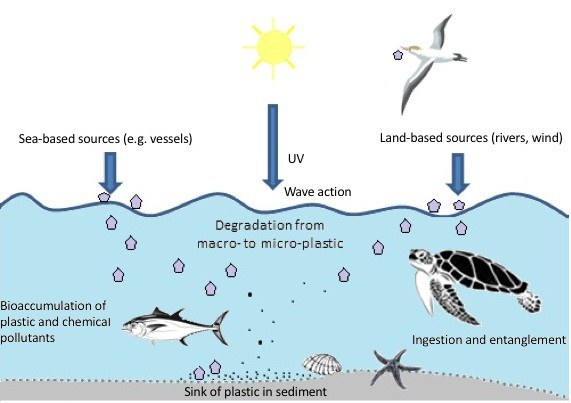 Litter is abundant on beaches of the North-East Atlantic (OSPAR Maritime Area). Plastic fragments, fishing-related litter and packaging are the most common types of litter found. Plastics comprise over 90% of items in some areas. There are no overall trends in the number of beach litter items recorded in the period 2009–2014. On the other hand, litter is widespread on the seafloor, with plastic the predominant material. Higher amounts of litter are found in the Eastern Bay of Biscay, Southern Celtic Seas and English Channel than in the northern Greater North Sea and Celtic Seas. Finally, currently 58% of beached North Sea fulmars have more than 0.1 g of plastic in their stomachs, exceeding OSPAR’s long-term goal of 10%. This reflects the abundance of floating litter in their environment. There has been no significant change in the amount of plastic in fulmar stomachs over the past ten years. (OSPAR Commission, 2017).

The average number of beach litter items on reference beaches of the Baltic Sea ranges from 47 - 280 per hundred meters of shoreline. High concentrations were found on urban beaches, plastics being the most common litter material. The 4 most frequent litter items groups at Baltic Sea level found were drinking related items (such as cups, caps, lids), plastic and polystyrene pieces, food related items (such as wrappers and packets), and cigarette butts and remains. Also, seafloor litter is monitored in connection to fish trawling surveys. 58 % of the 1,599 surveys reported in 2012-2016 contained marine litter items. Plastic was the most common litter material category at the Baltic Sea scale, constituting on average around 30 % of the number of items and 16% of the weight (HELCOM, 2018).

Information on beach marine litter in the Mediterranean exists but the picture is still fragmented and is geographically restricted to the northern part. Plastics are the major components with cigarette butts, food wrappers and plastic bags being the top marine litter items. Land-based sources are predominant but they have to be further specified. Tourism is directly affecting marine litter generation on beaches. During the summer period population is almost doubled in the coastal areas of the Mediterranean Sea, with a corresponding increase in waste generation, reaching up to 75% of the annual waste production for some areas. In what relates to floating litter, there are many areas with significant marine litter densities, ranging from 0 to over 7700 items per km² depending on the study area. Plastic is the major marine litter component, found widespread in the continental shelf of the Mediterranean, ranging up to 80% and 90% of the recorded marine litter items. However, the information on floating and seafloor marine litter in the Mediterranean is fragmented and is spatially restricted mainly to its northern part (UNEP MAP, 2017).

Descriptor 10: Marine litter does not cause harm