Non-indigenous species (NIS) are those species introduced outside their natural past or present range which might survive and reproduce. Some of the NIS can be harmless, with negligible impacts on native species. Other NIS can be invasive with potential to change native community composition and cause local population extinction with long lasting impacts which threaten biodiversity and ecosystem services. Those are addressed by the EU Regulation 1143/2014 on Invasive Alien Species which starts to include some marine species.

The MSFD requires to identify the newly-introduced NIS in the EU Member States waters, as well as to assess the abundance and spatial distribution of established NIS, as well as the adverse effects produced by them.

1.223 NIS have been introduced in Europe’s Seas between 1949 and 2019 (Figure 1). The number of NIS is highest in the Mediterranean Sea, where 69 % of all NIS have been recorded. A total of 21% were recorded in the North-East Atlantic Ocean, 5 % in the Baltic Sea and 3 % in the Black Sea. More than 80 NIS were identified as 'invasive alien species' with a high potential to produce impacts on the biodiversity, as well as cause negative economic and social consequences. Currently, over 53% of Europe’s coastline is inhabited by invasive NIS. These invasive species have been known for typically impact several other species, ecosystem functions and the modification of natural habitats. The mean number of new recorded NIS introductions slowed down from 28 to 16 species per year in the period 2006 - 2017. In some of EU Member States, the number of new marine species introduced via human activity has already been reduced to zero as a result of successful management. 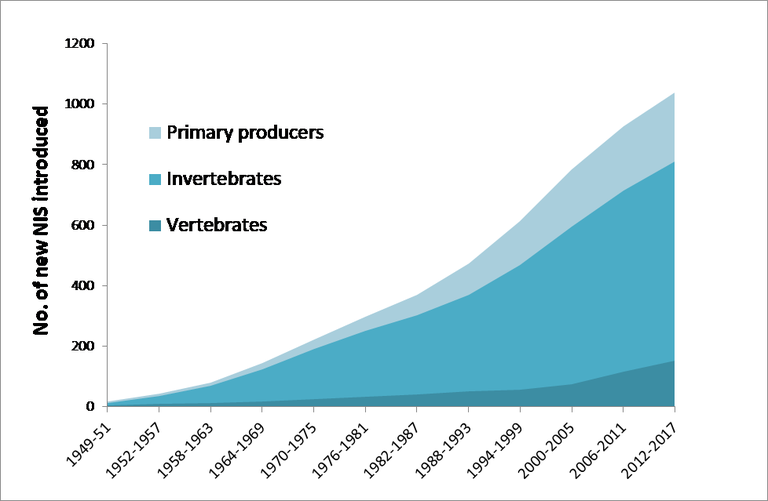 Figure 1: Trends in introductions of marine non-indigenous species (vertebrates, invertebrates, primary producers) after 1949-2017 per 6-year periods in the Europe’s seas.(EEA, 2019a)

Figure 2: Percentage of NIS introductions associated with each pathway in European Seas after 1949 (EEA, 2019b)

Descriptor 2: Non-indigenous Species do not adversely alter the ecosystem