Floods Directive (2007/60/EC) on the assessment and management of flood risks requires Member States to assess if all water courses and coast lines are at risk from flooding, to map the flood extent and assets and humans at risk in these areas and to take adequate and coordinated measures to reduce this flood risk.

Flooding is a natural and not uncommon process associated with river dynamics, but across Europe and throughout the ages, floods have affected human health, the environment, cultural heritage and economic activities. To address the risks of floods in Europe, the Floods Directive was composed with an aim to reduce and manage the risks that floods pose to human health, the environment, cultural heritage and economic activity. It requires Member States to assess if all water courses and coastlines are at risk from flooding, to map the flood extent and assets and humans at risk in these areas, as well as to take adequate and coordinated measures to reduce this flood risk.

The Directive also reinforces the rights of the public to access this information and to have a say in the planning process.

Almost 1.500 flood events were reported for Europe since 1980

Flood events have resulted in over 4.300 and caused economic damage of more than 170 billion euro since 1980

Flood events are expected to increase in the future due to climate change and other antropogenic causes.

Implementation status in the EU

Based on the information on past floods reported by EU Member States in the Preliminary Flood Risk Assessments (PFRA) under the Floods Directive and complemented by data from global databases an EU overview of significant floods and their impact is now available for European countries. The database, which includes environmental impacts and impacts on cultural heritage where available, as well as fatalities and economic damage, is available at: European past floods dataset.

Between 1980 and 2010, 3 563 distinct flood phenomena (floods) were evidenced in 37 European countries. The highest number of floods is reported for the most recent year in the dataset, i.e. 2010: 321 floods in 27 countries. This number is associated with the 'central European floods', which occurred across several central European countries during May and June 2010. In Poland, more than 20 people lost their lives, approximately 3 400 km2 of land was inundated by the floods and the total cost of flood damage has been assessed as more than EUR 2 billion (2 000 million). Bulgaria, France, Germany, Hungary, Serbia, Slovakia and other countries were affected. The EU with its European Environment Agency will further improve knowledge on past floods and their impacts, including trend analyses for European regions.

FIGURE 1 shows the shows the number of reported flood phenomena since 1980, which are weighted in respect of country areas (Flood risks and environmental vulnerability, 2016). 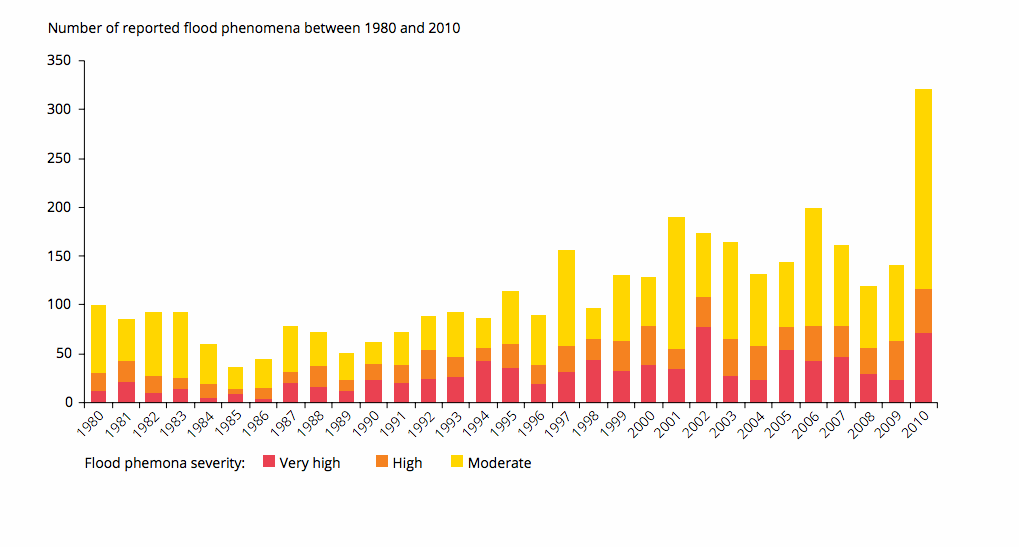 FIGURE 2 shows economic damage caused by weather and climate-related extreme events in Europe, including floods and mass movements as part of hydrological events. Despite high annual variability, floods remain one of the most costly natural disasters.

Global warming is projected to intensify the hydrological cycle and increase the occurrence and frequency of flood events in large parts of Europe.

See more in the report on Climate change, impacts and vulnerability in Europe

FIGURE 3 shows the projected changes in the discharge of a once-in-a-century (Q100) river flood between the reference period (1981–2010) and two levels of global warming (1.5 and 3 °C). The projections are based on the hydrological model LISFLOOD and an ensemble of climate models, assuming that non-climatic factors remain the same. Q100 floods are projected to increase in most European regions, with the greatest increases projected for central and central-eastern Europe. In contrast, decreases in Q100 floods are projected for parts of northern Europe (owing to a reduction in snow accumulation, and hence melt-associated floods) and for southern Spain and Turkey (due to a reduction in rainfall). The projected changes are considerable larger for high than for low warming levels. 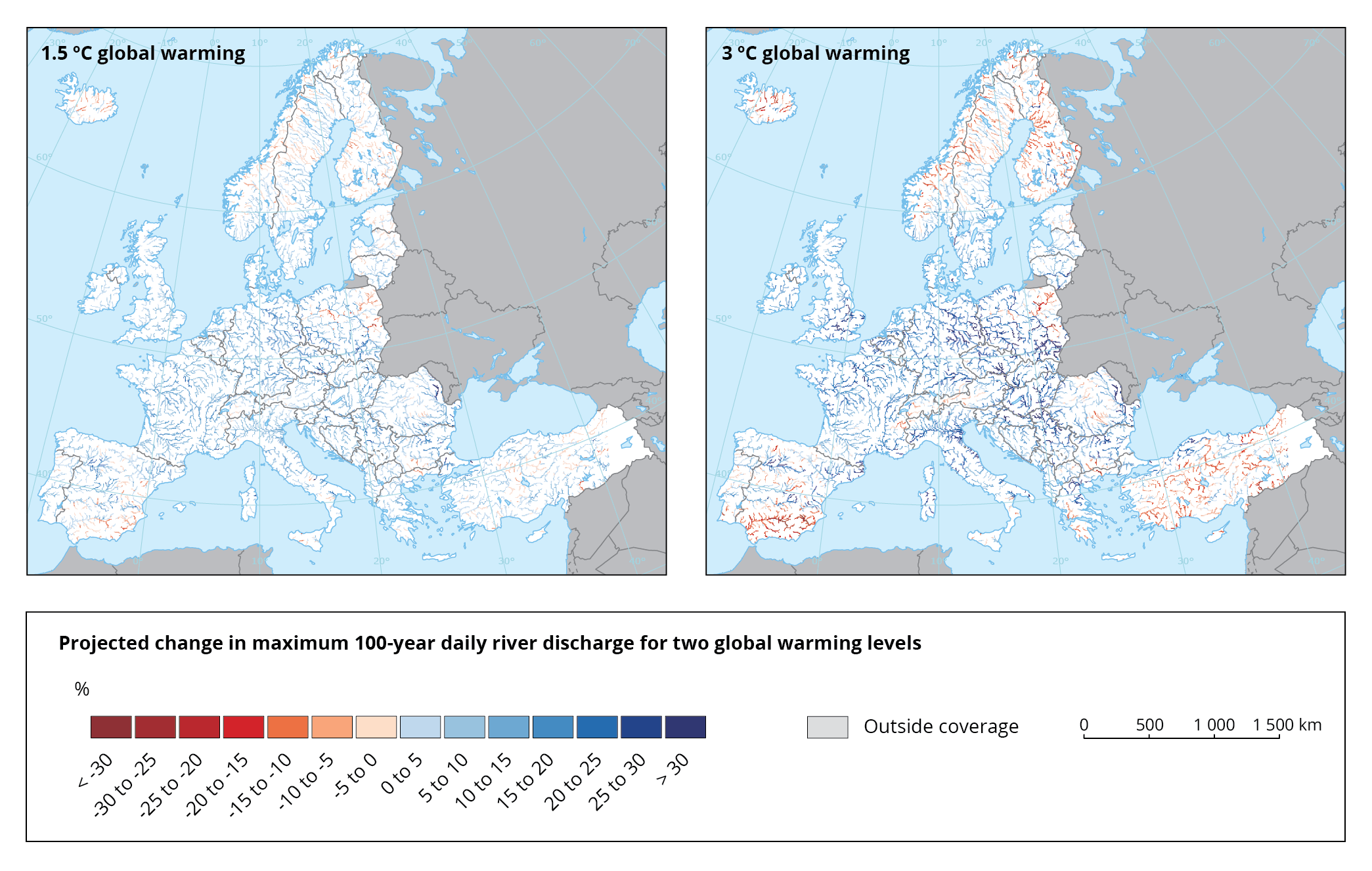 If you want to learn more

Although floods are natural phenomena, catastrophic floods endanger lives and cause human tragedy as well as heavy economic losses. Through the right measures we can reduce their likelihood and limit their impacts. In addition to economic and social damage, floods can have severe environmental consequences, for example when installations holding large quantities of toxic chemicals are inundated or wetland areas destroyed. Flood protection measures may also have negative environmental impacts, therefore coordination with other environmental and policy objectives should take place from the early stages of a project. The coming decades are likely to see a higher flood risk in Europe and greater economic damage. The immediate response to this challenge is sound flood risk management that accounts for climate change impacts.

What is flood risk management?

An example of natural water retention measure is the protection and restoration of floodplains which supports achieving key objectives of the Water Framework Directive, the Habitats and Birds Directives, and Floods Directive.

Floods Directive (FD) required Member States to first carry out a preliminary assessment by 2011 to identify the river basins and associated coastal areas at risk of flooding. For such zones they then needed to draw up flood risk maps (Flood Hazard and Risk Maps – FHRMs) by 2013 and establish flood risk management plans (FRMPs) focused on prevention, protection and preparedness by 2015. The Directive applies to inland waters as well as all coastal waters across the whole territory of the EU.

Floods Directive is carried out in coordination with the Water Framework Directive (WFD) in 6 years cycles, notably by flood risk management plans and river basin management plans (RBMPs) being coordinated, and through coordination of the public participation procedures in the preparation of these plans. All assessments, maps and plans prepared are available to the public. The 1st flood risk management cycle ends in 2021 therefore, by the end of 2021, the 2nd FD Flood Risk Management Plans along with the 3rd WFD River Basin Management Plans need to be established.

Member States need to coordinate their flood risk management practices in shared river basins, including with third counties, and shall in solidarity not undertake measures that would increase the flood risk in neighbouring countries. Long term developments, including climate change, as well as sustainable land use practices in the flood risk management cycle addressed in this Directive need to be taken into consideration.

The Floods Directive is in almost all Member States implemented at the level of the River Basin Districts designated under the Water Framework Directive and the same competent authorities are generally responsible for implementation of both, the WFD and FD.

Measures taken in RBMP and FRMP can contribute to both Directives’ ends. Natural water retention measures are an example of measures that can contribute simultaneously to the achievement of objectives under the WFD and the FD by strengthening and preserving the natural retention and storage capacity of aquifers, soils and ecosystems[1]. At the same time, plans for new flood protection infrastructure need to be assessed in terms of potential impacts on the achievement of good status under the WFD.

An example of natural water retention measure is the protection and restoration of floodplains which supports achieving key objectives of the Water Framework Directive, the Habitats and Birds Directives, and Floods Directive.

The main reference used in this page are: